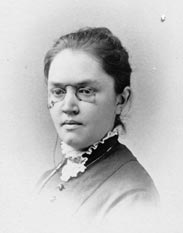 Katharine Lee Bates (August 12, 1859 – March 28, 1929) was an American author and poet, chiefly remembered for her anthem "America the Beautiful", but also for her many books and articles on social reform, on which she was a noted speaker.

Bates enjoyed close links with Wellesley College, Massachusetts, where she had graduated with a B.A., and later became a professor of English literature, helping to launch American literature as an academic speciality, and writing one of the first-ever college textbooks on it. She never married, possibly because she would have lost tenure if she had. Throughout her long career at Wellesley, she shared a house with her close friend and companion Katharine Coman. Some scholars have assumed that this was a lesbian relationship, considering some exchanges of letters sufficient proof, others believe their relationship may have been a platonic ‘Boston marriage’ in the contemporary phrase. Provided by Wikipedia
Showing 1 - 18 results of 18 for search 'Bates, Katharine Lee, 1859-1929', query time: 0.14s Refine Results
Search Tools: Get RSS Feed — Email this Search