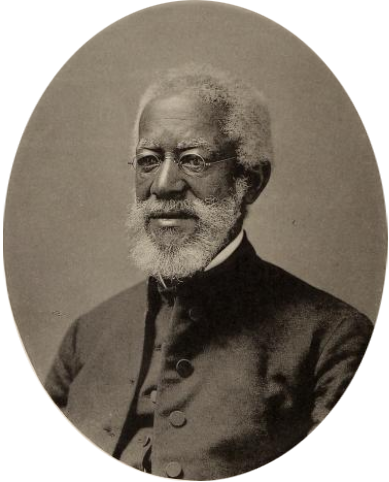 Alexander Crummell (March 3, 1819 – September 10, 1898) was a pioneering African-American minister, academic and African nationalist. Ordained as an Episcopal priest in the United States, Crummell went to England in the late 1840s to raise money for his church by lecturing about American slavery. Abolitionists supported his three years of study at Cambridge University, where Crummell developed concepts of pan-Africanism.

In 1853 Crummell moved to Liberia, where he worked to convert Africans to Christianity and educate them, as well as to persuade African American colonists of his ideas. He wanted to attract American blacks to Africa on a civilizing mission. Crummell lived and worked for 20 years in Liberia and appealed to American blacks to join him, but did not gather wide support for his ideas.

After returning to the United States in 1872, Crummell was called to St. Mary's Episcopal Mission in Washington, DC. In 1875, he and his congregation founded St. Luke's Episcopal Church, the first independent black Episcopal church in the city. They built a new church on 15th Street, NW, beginning in 1876, and celebrated their first Thanksgiving there in 1879. Crummell served as rector there until his retirement in 1894. The church was designated a National Historic Landmark in 1976. Provided by Wikipedia
Showing 1 - 13 results of 13 for search 'Crummell, Alexander, 1819-1898', query time: 0.16s Refine Results
Search Tools: Get RSS Feed — Email this Search