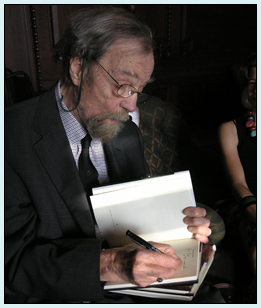 Donald Andrew Hall Jr. (September 20, 1928 – June 23, 2018) was an American poet, writer, editor and literary critic. He was the author of over 50 books across several genres from children's literature, biography, memoir, essays, and including 22 volumes of verse. Hall was a graduate of Phillips Exeter Academy, Harvard, and Oxford. Early in his career, he became the first poetry editor of ''The Paris Review'' (1953–1961), the quarterly literary journal, and was noted for interviewing poets and other authors on their craft.

On June 14, 2006, Hall was appointed as the Library of Congress's 14th Poet Laureate Consultant in Poetry (commonly known as "Poet Laureate of the United States"). He is regarded as a "plainspoken, rural poet," and it has been said that, in his work, he "explores the longing for a more bucolic past and reflects [an] abiding reverence for nature."

Hall was respected for his work as an academic, having taught at Stanford University, Bennington College and the University of Michigan, and having made significant contributions to the study and craft of writing. Provided by Wikipedia
Showing 1 - 20 results of 64 for search 'Hall, Donald, 1928-2018', query time: 0.20s Refine Results
Search Tools: Get RSS Feed — Email this Search