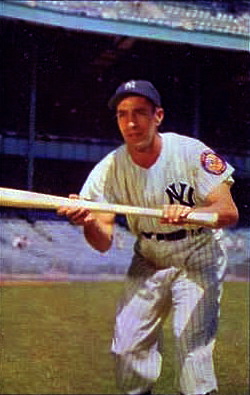 A popular figure on a team dynasty that captured 10 AL titles and seven World Championships in his 13 seasons, Rizzuto holds numerous World Series records for shortstops. His best statistical season was 1950, when he was named the American League's Most Valuable Player. Generally, Rizzuto was a "small ball" player, noted for his strong defense in the infield and as a great bunter. When he retired, his 1,217 career double plays ranked second in major league history, trailing only Luke Appling's total of 1,424, and his .968 career fielding average trailed only Lou Boudreau's mark of .973 among AL shortstops.

After his playing career, Rizzuto had a 40-year career as a radio and television sports announcer for the Yankees. He was known for his idiosyncratic, conversational broadcast style, and for his trademark expression "holy cow!" Provided by Wikipedia
Showing 1 - 1 results of 1 for search 'Rizzuto, Phil, 1917-2007', query time: 0.09s Refine Results
Search Tools: Get RSS Feed — Email this Search