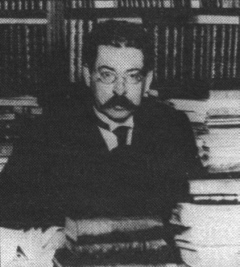 José Enrique Camilo Rodó Piñeyro (15 July 1871 – 1 May 1917) was a Uruguayan essayist. He cultivated an epistolary relationship with important Hispanic thinkers of that time, Leopoldo Alas (Clarín) in Spain, José de la Riva-Agüero in Peru, and, most importantly, with Rubén Darío, the most influential Latin American poet to date, the founder of ''modernismo''. As a result of his refined prose style and the ''modernista'' ideology he pushed, Rodó is today considered the preeminent theorist of the ''modernista'' school of literature.

Rodó is best known for his essay ''Ariel'' (1900), drawn from ''The Tempest'', in which Ariel represents the positive, and Caliban represents the negative tendencies in human nature, and they debate the future course of history, in what Rodó intended to be a secular sermon to Latin American youth, championing the cause of the classical western tradition. What Rodó was afraid of was the debilitating effect of working individuals' limited existence doing the same work, over and over again, never having time to develop the spirit. Among Uruguayan youth, however, he is best known for Parque Rodó, the Montevideo park named after him.

For more than a century now, ''Ariel'' has been an extraordinarily influential and enduring essay in Latin American letters and culture due to a combination of specific cultural, literary, and political circumstances, as well as for its adherence to Classical values and its denunciation of utilitarianism and what Rodó called "''nordomanía''" (explained below). Provided by Wikipedia
Showing 1 - 20 results of 22 for search 'Rodó, José Enrique, 1871-1917', query time: 0.17s Refine Results
Search Tools: Get RSS Feed — Email this Search