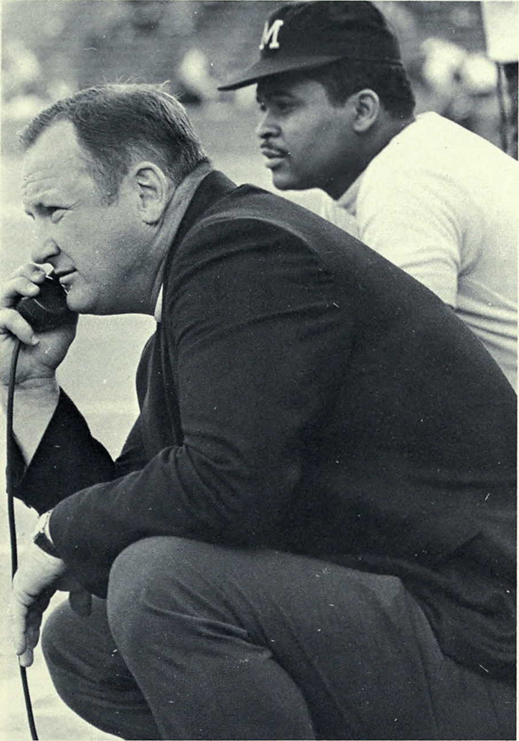 Glenn Edward "Bo" Schembechler Jr. ( ; April 1, 1929 – November 17, 2006) was an American football player, coach, and athletics administrator. He served as the head football coach at Miami University from 1963 to 1968 and at the University of Michigan from 1969 to 1989, compiling a career record of 234–65–8. Only Nick Saban, Joe Paterno and Tom Osborne have recorded 200 victories in fewer games as a coach in major college football. In his 21 seasons as the head coach of the Michigan Wolverines, Schembechler's teams amassed a record of 194–48–5 and won or shared 13 Big Ten Conference titles. Though his Michigan teams never won a national championship, in all but one season they finished ranked, and 16 times they placed in the final top ten of both major polls.

Schembechler played college football as a tackle at Miami University, where in 1949 and 1950 he was coached by Woody Hayes, for whom he served as an assistant coach at Ohio State University in 1952 and from 1958 to 1962. In his first ten years at Michigan, Schembechler's teams squared off in a fierce rivalry against Hayes's Buckeyes squads. During that stretch in the Michigan–Ohio State football rivalry, dubbed the "Ten-Year War," Hayes and Schembechler's teams won or shared the Big Ten Conference crown every season and usually each placed in the national rankings.

In 1988, Schembechler assumed the role of athletic director at Michigan, succeeding Don Canham, the man who hired him as football coach in 1969. Schembechler retired as head football coach after the 1989 season. His longtime assistants, Gary Moeller and Lloyd Carr, helmed the team for the next 18 years. Schembechler left the University of Michigan in 1990 to take a job as president of Major League Baseball's Detroit Tigers, which he held until 1992. He was inducted into the College Football Hall of Fame as a coach in 1993. During his later years, Schembechler remained in Southeast Michigan and hosted a sports radio show. He died in 2006 at the age of 77 on the eve of that year's Michigan–Ohio State football game, a historic No. 1 versus No. 2 showdown. Provided by Wikipedia
Showing 1 - 3 results of 3 for search 'Schembechler, Bo', query time: 0.11s Refine Results
Search Tools: Get RSS Feed — Email this Search